Mikayla Kate, the hypnotist from,”Inductions” is back, in our latest video, “Mikayla Takes Over”.

This is a type of video we’ve wanted to do for a some time now. It begins as a one-on-one, in which Mikayla uses those now famous amber eyes of hers, to guide you into a gentle hypnotic sleep. Just as before, her voice is soft and measured, and her angelic eyes defy any attempt at resistance. You’ll belong to her from the very first moments and once she has you under, she’ll give you a fun post-hypnotic-trigger to re-induce hypnosis (this should come in handy for future sessions!)

After that she takes you into a, “What if?…” scenario. It goes like this…what if you could go to a hypnotherapist and simply ask for an hour of mind control. That’s the premise, and we think you’ll find the scene amusing, enjoyable and hypnotic. Not only does she grant the request, but she takes him through induction after induction. (this is Mikayla, after all). She hypnotizes him with a pen, a spiral, her fingers, her eyes…. she even hypnotizes him, with the idea of being hypnotized! If you like inductions, this is your kind of show.

Of course, you will know exactly what the guy in the video is feeling since you will be watching the scene while still under hypnosis from the one-on-one section. Watching this scene should also take you far deeper into her power, although to be clear, the scene is not interactive. At this point you will merely be a spectator.

This is certainly for anyone who liked, “Inductions”, in fact, that would be a perfect lead-in for this video. Combine the two and you should have one awesome, hypnotic experience.

This video will play on both PC and Mac with the Windows Media Player or the FREE VLC Player.

There are no reviews yet.

Only logged in customers who have purchased this product may leave a review. 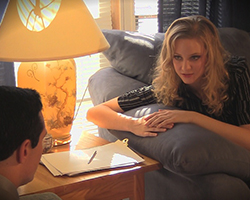